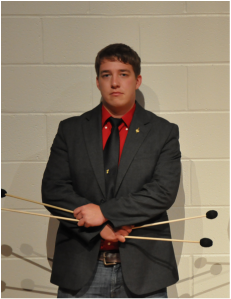 Josh Spaulding is currently the Director of Percussion and Assistant Middle School Band Director of the Horn Lake Eagle Pride Band Program in Horn Lake, Mississippi. He is a former student of Dr. Julie Hill at the University of Tennessee Martin, where he was a member of the UTM Percussion Ensemble, World Percussion Ensemble, Pep Band, Jazz Band, Wind Ensemble, Jamaica Me Happy and the Skyhawk Marching Band.  Josh previously served on the board of the PAS University Committee, and recently placed 6th in the 2012 PASIC collegiate marimba competition.  In addition, Mr. Spaulding was the Collegiate Division winner of the 2012 Tennessee PAS soloist competition.  Josh had the honor of participating in the 2011 and the 2012 Nief Norf Summer Festival at Furman University,  performing in Salvador de Bahia in Brazil with the UTM Percussion Studio in 2011, and performing with the Gateway Indoor WGI ensemble in 2014.  Mr. Spaulding has had numerous opportunities where he has worked and performed with world-class percussionists such as Mark Ford, She-e Wu, James Campbell, Thomas Burritt, Paul Rennick, John Tafoya, and Nebojsa Zivkovic among others.  Josh is an alumnus of the 2008 Tennessee Governor’s School for the Arts where he was instructed by Mr. Andy Smith.  Josh’s other former teachers include Mr. Dan McGuire, Mr. Jason Carpenter, Dr. Andy Bliss, and Amanda Peterson.  Josh is a member of the Syncro Percussion Duo, and a major collaborator for the Small Town Big Sound Project.  He is currently working on repertoire for Syncro as well as putting together a recording project composed of self-composed and commissioned works for marimba and vibraphone.

As a composer, Mr. Spaulding's music has been performed across the United States as well as in Thailand and Italy.  He recently was named a composition fellow for the University of Nebraska's 2013 Chamber Music Institute.  He has collaborated and been commissioned by numerous groups including the Mezcolanza Reed Quintet, the 4 Stix Clarinet Quarteta,  the UTM Undersound Ensemble, the Peterson/Haynes Duo, the Arc Percussion Trio, and the UTM Skyhawk Marching Band.

Josh holds a Bachelors degree in Music Education from the University of Tennessee Martin, and he is an active member of PAS, NAfME, SCI, and Phi Kappa Phi.